Setting the learning rate for stochastic gradient descent (SGD) is crucially important when training neural network because it controls both the speed of convergence and the ultimate performance of the network. Set the learning too low and you could be twiddling your thumbs for quite some time as the parameters update very slowly. Set it too high and the updates will skip over optimal solutions, or worse the optimizer might not converge at all!

Leslie Smith from the U.S. Naval Research Laboratory presented a method for finding a good learning rate in a paper called “Cyclical Learning Rates for Training Neural Networks”. We implement this method in MXNet (with the Gluon API) and create a ‘Learning Rate Finder’ which you can use while training your own networks. We take a look at the central idea of the paper, cyclical learning rate schedules, in the ‘Advanced Learning Rate Schedules’ tutorial.

Given an initialized network, a defined loss and a training dataset we take the following steps:

We then analyse the results by plotting a graph of the learning rate against the training loss as seen below (taking note of the log scales).

Usually, our unit of work is an epoch (a full pass through the dataset) and the learning rate would typically be held constant throughout the epoch. With the Learning Rate Finder (and cyclical learning rate schedules) we are required to vary the learning rate every iteration. As such we structure our training code so that a single iteration can be run with a given learning rate. You can implement Learner as you wish. Just initialize the network, define the loss and trainer in init and keep your training logic for a single batch in iteration.

We also adjust our DataLoader so that it continuously provides batches of data and doesn’t stop after a single epoch. We can then call iteration as many times as required for the loss to diverge as part of the Learning Rate Finder process. We implement a custom BatchSampler for this, that keeps returning random indices of samples to be included in the next batch. We use the CIFAR-10 dataset for image classification to test our Learning Rate Finder.

With preparation complete, we’re ready to write our Learning Rate Finder that wraps the Learner we defined above. We implement a find method for the procedure, and plot for the visualization. Starting with a very low learning rate as defined by lr_start we train one iteration at a time and keep multiplying the learning rate by lr_multiplier. We analyse the loss and continue until it diverges according to LRFinderStoppingCriteria (which is defined later on). You may also notice that we save the parameters and state of the optimizer before the process and restore afterwards. This is so the Learning Rate Finder process doesn’t impact the state of the model, and can be used at any point during training.

You can define the LRFinderStoppingCriteria as you wish, but empirical testing suggests using a smoothed average gives a more consistent stopping rule (see smoothing). We stop when the smoothed average of the loss exceeds twice the initial loss, assuming there have been a minimum number of iterations (see min_iter).

Using a Pre-activation ResNet-18 from the Gluon model zoo, we instantiate our Learner and fire up our Learning Rate Finder!

As discussed before, we should select a learning rate where the loss is falling (i.e. from 0.001 to 0.05) but before the loss starts to diverge (i.e. 0.1). We prefer higher learning rates where possible, so we select an initial learning rate of 0.05. Just as a test, we will run 500 epochs using this learning rate and evaluate the loss on the final batch. As we’re working with a single batch of 128 samples, the variance of the loss estimates will be reasonably high, but it will give us a general idea. We save the initialized parameters for a later comparison with other learning rates. 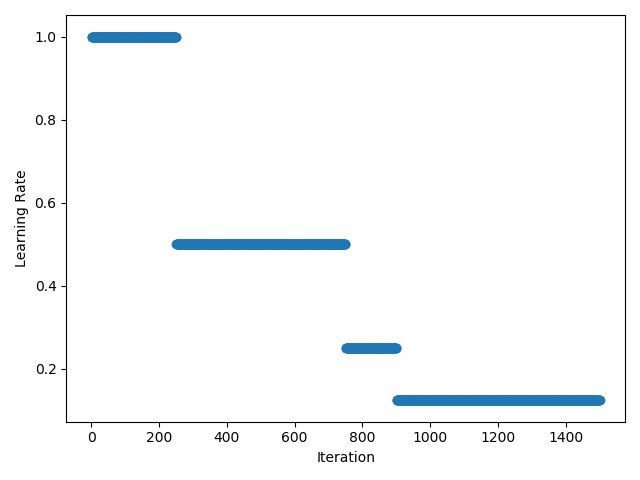 Stepwise schedules and the discontinuities they introduce may sometimes lead to instability in the optimization, so in some cases smoother schedules are preferred. PolyScheduler gives a smooth decay using a polynomial function and reaches a learning rate of 0 after max_update iterations. In the example below, we have a quadratic function (pwr=2) that falls from 0.998 at iteration 1 to 0 at iteration 1000. After this the learning rate stays at 0, so nothing will be learnt from max_update iterations onwards.

Note: unlike FactorScheduler, the base_lr is set as an argument when instantiating the schedule.
And we don’t evaluate at iteration=0 (to get base_lr) since we are working with schedules starting at iteration=1.

You can implement your own custom schedule with a function or callable class, that takes an integer denoting the iteration index (starting at 1) and returns a float representing the learning rate to be used for that iteration. We implement the Cosine Annealing Schedule in the example below as a callable class (see call method). 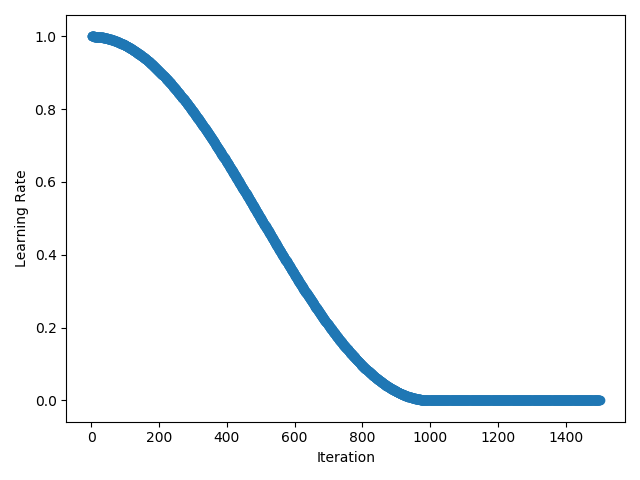 While training a simple handwritten digit classifier on the MNIST dataset, we take a look at how to use a learning rate schedule during training. Our demonstration model is a basic convolutional neural network. We start by preparing our DataLoader and defining the network.

As discussed above, the schedule should return a learning rate given an (1-based) iteration index.

We then initialize our network (technically deferred until we pass the first batch) and define the loss.

We’re now ready to create our schedule, and in this example we opt for a stepwise decay schedule using MultiFactorScheduler. Since we’re only training a demonstration model for a limited number of epochs (10 in total) we will exaggerate the schedule and drop the learning rate by 90% after the 4th, 7th and 9th epochs. We call these steps, and the drop occurs after the step index. Schedules are defined for iterations (i.e. training batches), so we must represent our steps in iterations too.

We create our Optimizer and pass the schedule via the lr_scheduler parameter. In this example we’re using Stochastic Gradient Descent.

And we use this optimizer (with schedule) in our Trainer and train for 10 epochs. Alternatively, we could have set the optimizer to the string sgd, and pass a dictionary of the optimizer parameters directly to the trainer using optimizer_params.

We see that the learning rate starts at 0.03, and falls to 0.00003 by the end of training as per the schedule we defined.

When using the method above you don’t need to manually keep track of iteration count and set the learning rate, so this is the recommended approach for most cases. Sometimes you might want more fine-grained control over setting the learning rate though, so Gluon’s Trainer provides the set_learning_rate method for this.

We replicate the example above, but now keep track of the iteration_idx, call the schedule and set the learning rate appropriately using set_learning_rate. We also use schedule.base_lr to set the initial learning rate for the schedule since we are calling the schedule directly and not using it as part of the Optimizer.